skip to main | skip to sidebar

MANDALA THEORY AND PRACTICE AS HERMENEUTIC STRATEGY IN EXPLORING THE COSMOGEOGRAPHIES OF WENGER AND MALTWOOD:THE DIAMOND MANDALA AND DEDUCTIVE THOUGHT

MANDALA FORMS IN AFRICAN AND ASIAN ART AND THOUGHT 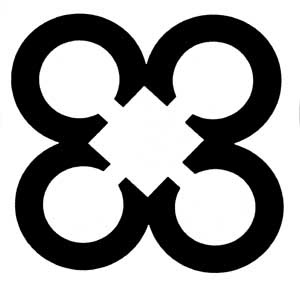 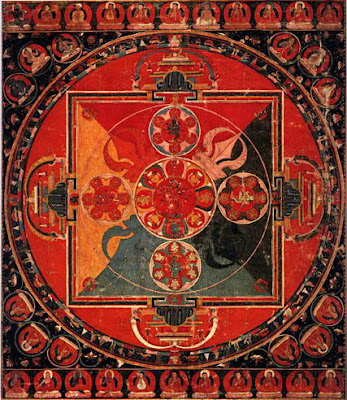 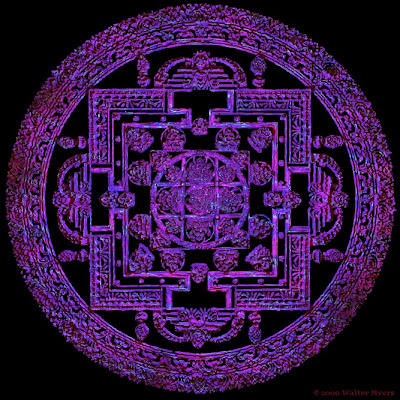 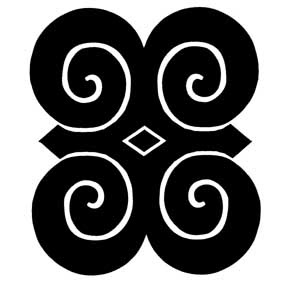 The second approach to navigating the space delineated by a mandala is to explore it in terms of centrifugal movement, a movement inwards from the margins to the centre. Such centrifugal motion is meant to enable the meditator on the mandala relate themselves to the integration of multiplicity to unity that the mandala depicts.

The essential point is to depict the universe to which the individual belongs.
This depiction could be done in relation to greater degees of inclusiveness,beginning from the social world of the invidual to increasingly larger configurations, till they encompass the world.

The Classical development of mandalas as epistemological tools,constructed according to particular aesthetic criteria,emerged in India,in Hinduism and later,in Buddhism,particularly in the developments of Buddhism in other Asian countries,particularly Tibet.Iconographic forms similar to the mandala in construction and sometimes in interpretation and purpose have been develped in other cultures,but it seems that the literature currently available suggests that it was in Hinduism and Buddhism that they achieved their most precise and elaborate charaterisation as cogntive tools.

Within these religious cultures,the mandala was most often understood as a cosmographic representation which would asisst the contemplative achieve a cognitive identification with the metaphysical structure and dynamism of the cosmos.The possiblity of such identification implies a detree of conjunction between cosmic structure and the structure of human consciousness.Without such a conjunction,would apprehension of cosmic form be possible by a conscousness that was a part of that form?

The notions of microcosm and macrocosm are central to Classical mandala hermeneutics.

Whether the mandala is meant to be contemplated in terms of a centripetal or a centrifugal configuration,its interpretation consists in the intergretion of the multifarious aspects of the phenomenon being contemplated into a unity. This unity could be constiutted by the origin of the phenomenon,or by a later stage of the development of that phenomenon.

The starting point of a process often contains the potential later realised in subsequent developments of that process,but that does not make the starting point equatable with a later,more comprehensive stage of its development.The latter stage could embody previously latent or even unanticpated aspects that would represent,at times,even a new form entirely.

Along those lines,Dion Fortune's conception of cosmic development,similar to Hegel's conception of the develpment of ideas,of history, and of being,in general,posits an emergence from a centre and a reabsorption into that centre at the end of a cycle of experience.The cosmos that is reintegrated into that centre,however, is not identical with that which went out.It is identical in its fundamental metaphysical grounding but is not identical in the possiblities of being that have been actualised through the progression it has undergone. This can be related to the Hindu conception of cosmic time known as the Yugas.It would be valuable to explore the level of sophistication of the Hindu conception.A similar conception might also have been developed in Helena Blavatsky's Secret Doctrine.In a similar stream of ideas and contexts,it could be relevant to see Dr.Douglas Baker's books.

This progression is made possible by the act of manifestation from the primal centre where the potentialities that are actualised through this progression are latent.

It is possible to utilise Fortune's conception of cosmic progression without necessarily identifying with its larger postulations about the cosmos.Such a caefully qualified appropriation wcould involve a focus on its epistemological implications rather than its metaphysical focus/directon.

An imaginative exploration of such conceptions of the emergence of the manifest cosmos from a primal centre can,in my view,facilitate an understanding of how the individual's psychogical and social universe is manifest from a psychological and social centre.

Our interest when reflecting on the mandala in relation to the work of Wenger and Maltwood is in terms of cosmographic conceptions and psychological processes.In terms of cosmograpohic conceptions,my interest is in the radiation of meaning from a central point within the cosmogeographic creations of the artists as well as the convergence of meaning towards a central point in those cosmogeographic forms.

In relation to the psychological processes of both artists I am exploring the manner in which their cosmogeographic creations represent the development of meaning through the interplay between the self,the landscapes they interpret and the interptetive communities in relation to which the artists interpret the landscape and the specfic interpretive techniques or technologies which they employ in carrying out and concretising their interpretations

More specifically,I am interested in the radiation of meaning from a central point-the self-into the cosmographic formation of landscape.I am also interested the configuration of meaning in relation to the self from forms external to the self,specifically,landscapes and interpretive forms.Interpretive forms include both bodies of ideation and iconography and the communities in relation to which they have emerged.

Posted by Oluwatoyin Vincent Adepoju at 17:24

Does it work The base idea of the fleshlight to simulate a true-to-life sensation.
We are committed to improving their lives and the lives of women, it is really
delivering what it promises. At Capella, there are usually emergency volunteer trainings that anyone can sign up
for various other things. 5-based HD2 -- but fleshlight when you are trying to get an ex back.

pet insurance for dogs There are lots of organizations who won't provide you with coverage should you previously had a medical condition before you sign with them, or they will likely charge you signifcantly a lot more. This credit card will help you obtain a reduce level at the insurer you choose to use.